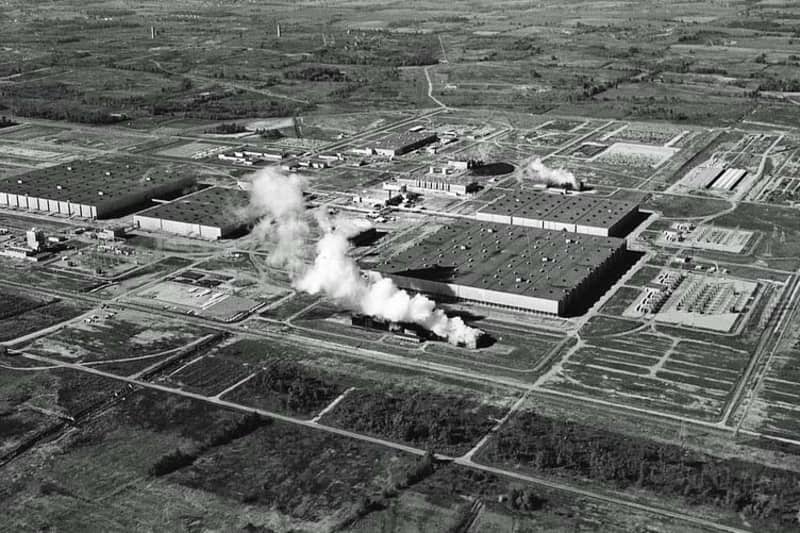 The Department of Energy's (DOE) Paducah Gaseous Diffusion Plant opened in 1952 to enrich uranium for nuclear weapons. During the plant's Cold War history, more than one million tons of uranium was processed.
Construction of the Paducah plant began in 1951 in response to the increased demand for enriched uranium for nuclear weapons production. Initial operations began in 1952 and full operation commenced in 1955. In addition to producing enriched uranium for weapons, the plant also supplied enriched uranium for the Navy and commercial fuel. The Paducah Plant also acted as the uranium hexafluoride feed point for all gaseous diffusion plants until 1964. Throughout the course of its operations, the potential for beryllium exposure existed at this site.
From 1951- July 28, 1998 all 3,556 acres were exclusively controlled by the Government and considered the DOE facility.
On July 1, 1993, the United States Enrichment Corporation (USEC)*, a government-owned corporation formed under the Energy Policy Act of 1992, assumed control of the plant's uranium enrichment activities. USEC, which was fully privatized in July 1998, produced low enriched uranium for commercial use through May 2013. Between July 29, 1998 and September 30, 2014, only roads and grounds outside the perimeter fence surrounding the enrichment facilities, plus approximately 200 acres of grounds inside the fence, remained under the exclusive control of DOE's Office of Environmental Management. During this timeframe the inner portion of the footprint was leased to USEC to support uranium enrichment operations and DOE maintained its responsibility for addressing the environmental cleanup resulting from historic plant operations.
By October 2014 USEC had returned the leased plant facilities back to DOE and regulatory control reverted from USEC/NRC back to DOE. Therefore by October 1, 2014, the entire property is again considered a DOE facility.